Our Experience With Blue Horizons for Autism Hosted by JetBlue

Blue Horizons for Autism hosted by JetBlue helped us get over  something we have been terrified to even try before today. Our son, Dom, is a funny, loving, intelligent boy who just happens to have autism. Traveling has always been a struggle for him due to being confined for long periods of time as well as being in unfamiliar places. We have had to drive the almost 1,000 miles one way, to Ohio as well as Pennsylvania for vacations over the last several years because flying wasn’t an option, or so we thought. We’ve always thought “this would be so much easier if we could just fly” but because of the news stories about individuals having meltdowns or other problems on planes and getting kicked off or having other passengers yelling at them or even worse, having to have the plane make an emergency landing. 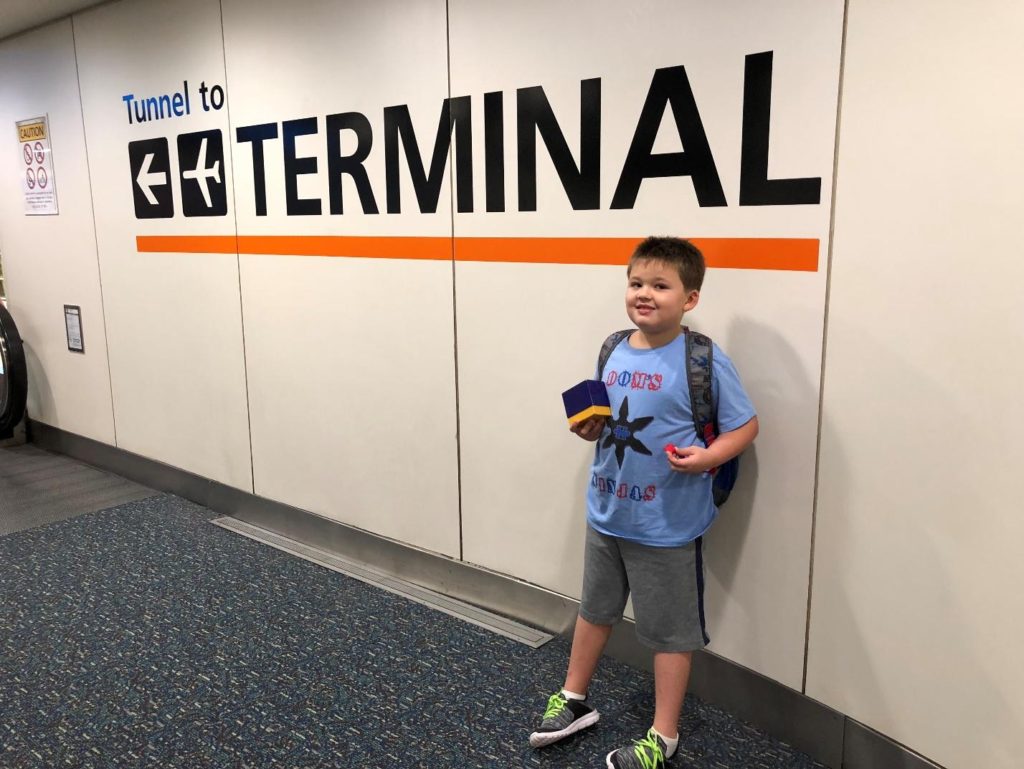 Blue Horizons for Autism is an event where JetBlue and Autism Speaks join forces to provide a practice traveling experience for families with a loved one on the autism spectrum.  From the minute you step into the terminal they have staff and volunteers to guide you through the entire process of flying. From ticketing, security, to boarding ,there is someone there to offer assistance if your family member needs help. The experience has changed our views on flying with our son with autism!

As per the usual for a child with autism who needs preparation beforehand, we told Dom we were going on an airplane while en route to the airport. He didn’t seem too thrilled, but he was cool with passing the exit to Disney (usually some screaming is involved with that). Parking at the airport was insane. There was limited disability parking so Kevin dropped us off and we headed inside while he parked in order to avoid any possible behavioral outbursts. When we joined back together, we talked about everything we were about to do. Dom likes to know ahead of time what’s going to happen. As we went up the escalator to the ticketing area, my heart was racing. “How will he handle to the crowds? How will he handle the noise? The lights? All of the other things that can trigger a full out meltdown. Did I pack enough of his favorite things to keep him happy?”. But before I could keep questioning the “what ifs” there was a JetBlue representative greeting us at the top of the escalator! A friendly face with a warm smile welcomed us and directed us in the direction of our first stop. 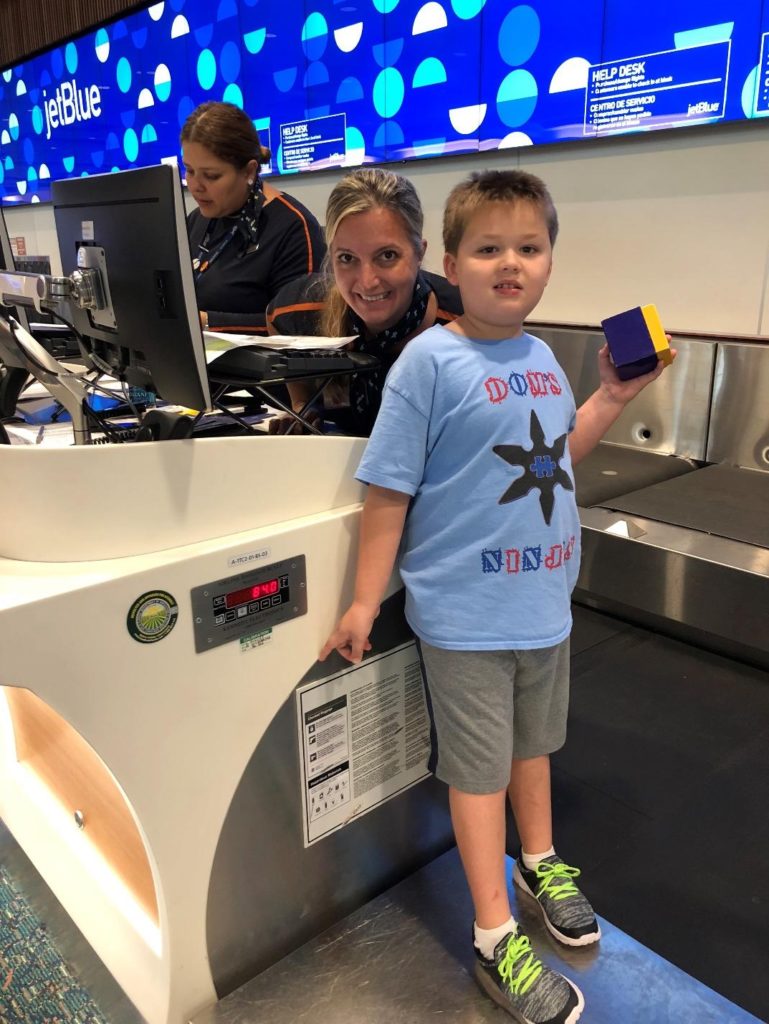 They gave Dom a Blue Horizons t-shirt, a goodie bag and a reat big smile and welcome! The line was a little long but this was a great opportunity to show Dom there will be a wait as well as teaching us to successfully find ways to keep him occupied as this would mimic a real world scenario at the airport. The staff at the ticketing counter were so friendly and made sure we were comfortable the entire time. Dom ,of course. climbed on the scale before we could tell him to stop. The employee said “Hey buddy! Come here, stand next to me!”. In a world where we are constantly told “your child can’t do this…they can’t do that” or where we tend to overthink how we are being perceived, it was nice to see he was talked to and treated just like any other kid. If nothing else happened, that right there was enough to make it worth it! They handed us our tickets, made sure we understood them, and then directed us on to the next stop.

I personally hate going through security. It always feels rushed yet people go so slow. The TSA staff truly impressed us! They talked to Dom first, even when we answered for him, they still spoke to HIM! When the staff is trained properly and genuinely care about their customers, these are the things that can make the world of difference, it can change an entire experience. I thought for sure that he was going to hate putting his things on the belt. These items h keep him calm and are his “comfort” items. He giggled and laughed the entire time. He loved helping push our things through the x-ray machine and even tried lifting up the rubber curtains in order to see inside the machine.  He then quickly went through the metal detector in order to see his things come out the other side. But his favorite part was the rollers after the belt. Again, I thought “Oh great! STOP! Dom!”. I was just waiting for the agents to start getting on his case. But that never happened. The exact opposite! They were laughing right along with him. The huge smiles on their faces as they watched him have a blast, made me stop and start to relax. 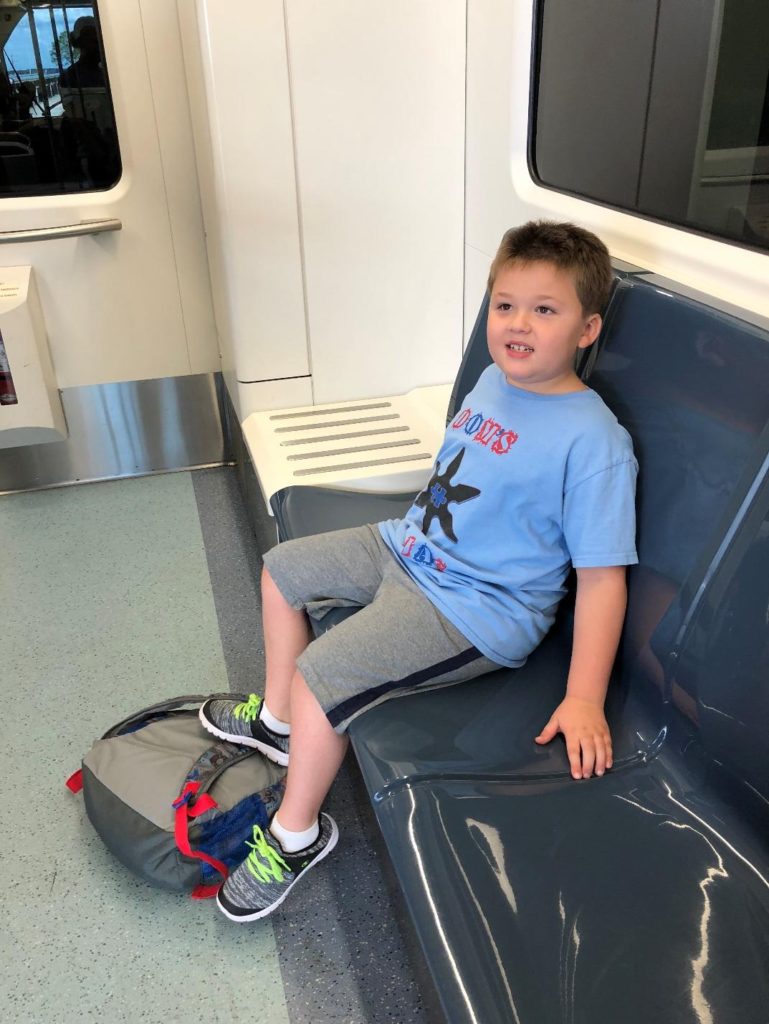 A quick trip on the tram,brought us to our gate. JetBlue, Autism Speaks, and MCO reps were all there welcoming us. The pilots were in the waiting area, talking to all the families and taking pictures. The flight attendants were making sure everyone understood their tickets and when to board. When it was time to board, they had an agent checking tickets before the agent who was scanning. They really thought through where to place agents, keeping the families busy. When there’s nothing going on, that’s usually when things go bananas for us!

We walked down the ramp to our favorite JetBlue flight attendant, Paulie. Dom got a round of high-fives from the crew as we walked to our seats. Dom does very well in the car, especially when he has his favorite things with him so sitting on the plane was the easy part! 😊 They had us taxi on the runway, so we could get a feel for the movements and sounds an airplane can make. The staff brought waters and snacks, which of course Dom loved. They allowed the kids to go in the back to see where they keep all the snacks and where the flight attendants sit. It was incredible to watch the staff interact with not just Dom but other families. We even noticed they called the kids by their first names and if they did not know their names they built relationships with the families to get to know it. Not once did any of them flinch when a kid would start to “explore” the plane like taking a stop in the bathrooms to test that out 😉 A little bit later they made the announcement that if we wanted to go check out the cockpit, to hang tight in our seats. My husband and I were insanely excited for this part! 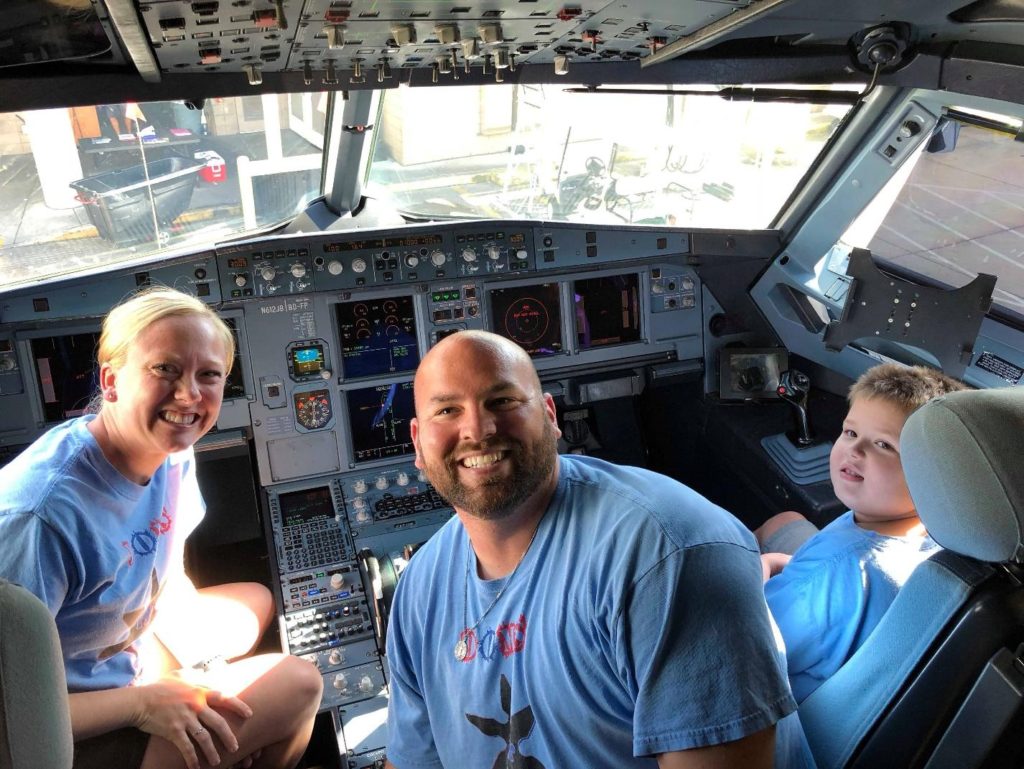 The pilots were very soft spoken and allowed him to look around. Next thing we know, they tell him to take a seat in the pilot’s seat! There’s our 8-year-old son, who struggles daily with things that so many take for granted, sitting in the pilot’s seat on an airplane. The pilot then got out of his seat and told me to sit down for a picture. His exact words “I’ve seen you two working hard today, you need to be in a picture too” and made Kevin sit down as well. We never want to be praised for just doing what we feel any parent should do for their kid. But hey, if a pilot tells us to sit in his seat, who are we to say no?!

The getting out of the plane was the part that gave us trouble. Dom loved the experience so much he didn’t want to leave. He kept saying “airplane, airplane”which led to a meltdown. In minutes, as two pilots stood watching the whole thing, Kevin and I were able to calm him down and we walked up the ramp. Then, boom! Another meltdown. We sat him down for a picture with Paulie, only for things to get worse. As we get him up to leave, someone walks up to ask if we need assistance. Wait, what? He’s had plenty of meltdowns before in public. Not once has anyone taken the time to ask. Of course, we said we were good, and went on our way. I usually get very emotional after such a big meltdowns but that person stopping to simply asked if we needed help was all I needed to push through the meltdown. She reminded me that there are amazing people, organizations and companies out there that truly care about families like ours! 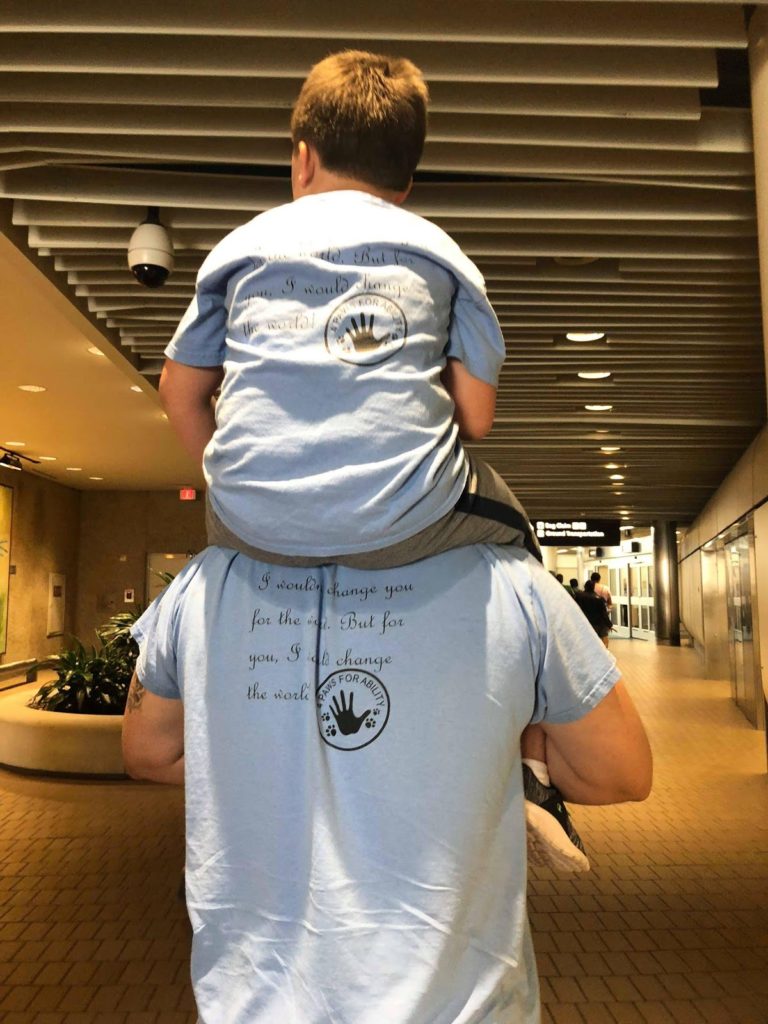 If you have a loved one on the spectrum, I highly recommend looking into events like this! We went from never wanting to fly, to thinking “wow, this may actually work out!”. The way the world is today, we have been staying in our shells. People can be cruel when your loved one is having a meltdown or just being “different”. The looks, stares, whispers and sometimes comments  can break your heart. Not because you care what they think of your parenting but because you know that they are seeing your sweet child at their absolute worst moment. A moment you pray you can get them through. A moment where something inside is bothering them so much and the only way they can communicate their frustrations or words is in the form of a meltdown. Today, Blue Horizons for Autism, provided us with the exact opposite! We felt welcomed, accepted and even loved! Thank you, JetBlue, Autism Speaks and MCO for helping us see that we need to stop just surviving. We need to get out and truly live! 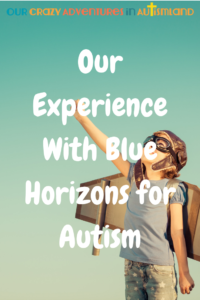