Although society as a whole has become more understanding of disorders of all types, those with autism still face an uphill battle against discrimination.  This battle is just as difficult for the families of  individuals with autism.  The seeds of this discrimination battle are based on ignorance and old stereotypes.  To prevent autism discrimination, it is vital that those involved fight this battle both individually and as a group.  The weapons for a victory must be education, publicity, and the law. 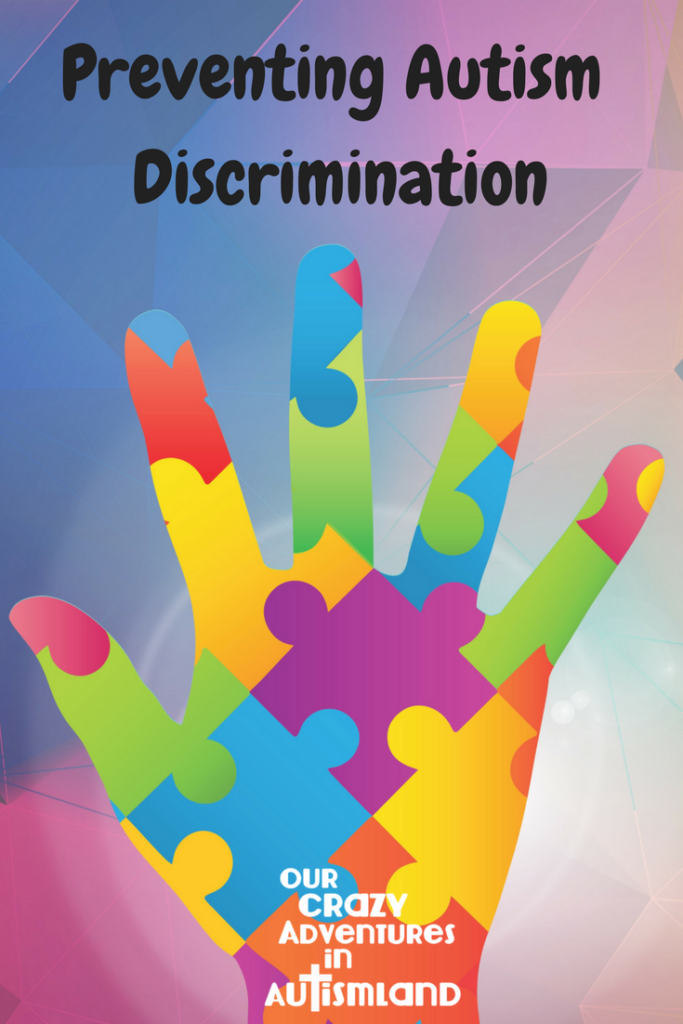 The first step in preventing autism discrimination is for people to know what autism is and what it is not.  According to the Center for Disease Control, 1 in 68 children in the United States is diagnosed with autism, yet few people are aware of what it really is.  Autism is a disability characterized with difficulty communicating and fitting into routine social situations.  People with autism struggle to understand verbal and physical cues that most people take for granted.


Most importantly persons with autism are not a monolithic group that must be separated from society as a whole.  They are a diverse group of which many members can live lives no different than most in society.

Getting Educated on Autism

Most people are not familiar with autism until a member of their family is diagnosed with the disorder, From then on, they get an education on both the diagnosis and how to help the individual will cope in the future.  These family members will become very educated on autism, just like any parent whose child is diagnosed with a disorder or illness.

This education, however, should not remain in the home. To change perceptions, those involved must get the word out to the general public.  Employers as well as schools need to know what autism is so that they do not discriminate before a person with autism even gets a chance.  Lifting this burden of ignorance will allow those with autism to reach their full potential.

The first step is a basic understanding that autism is a spectrum disorder.  No two people with autism are the same and the differences can be significant.  Yet if a hiring agent knows only one person with autism and that person is severely affected, he may base all of his opinions on that experience.  He may assume that all  people with autism act similar to each other.  This misunderstanding is a huge barrier in fighting autism discrimination.

Society must understand what this spectrum means.  There are those individuals with autism that lead full lives including receiving advanced degrees and raising families.  65% of Americans diagnosed with high functioning autism are either working or are in college, according to the Autism Society.  These numbers can be even higher with early detection and treatment.  At the other end of the spectrum are people who have very little ability to function without supervision.  Therefore, it is vital that people not ask “Does this person have autism?” but rather “How well can this person function?”

The next step is to erase stereotypes.  A stereotype of any type is harder to erase when it appears in film.  Yet Hollywood, which champions itself as a destroyer of stereotypes, has no problem creating them when it comes to the autistic community.  The movie Rain Man may have been an Academy Award winning film, but it did little to remove the idea that those with autism were uncommunicative oddities.


However, it is not just the big or small screen that causes these stereotypes.  People are generally skittish around anything or anyone that they are not familiar with.  Autism is no different.  And although the numbers of people with autism is significant, it is not significant enough for everyone to see a need for this understanding.

Go to the Stakeholders

So how to defeat discrimination?  The best approach is for autism community and its advocates to go directly to those who will make a difference.  It is important that all educational institutions have an understanding of what they can expect from their current or potential students with autism.  If they know what they are dealing with, they should be less reluctant to assist in accepting and developing pupils with autism.

What about employers?  This is where advocates must push harder for understanding.  It is no secret that workplace discrimination of any kind can be subtle.  Therefore it is important that advocates work with government agencies get the word out on the potential of employees with autism and how they will not be a detriment to an organization.

Finally, it is not always a matter of getting the word out or simple encouragement.  Here in America, it took the Americans with Disability Act to get employers to move beyond lip service.  For the autism community, the best answer may often be a legal one.  It is important that employers know that any discrimination will lead to legal action.  Although this may not be the preferred method, this tactic is the best one to keep any institution on the straight and narrow.

This article was written by Sam Socorro from Steam Shower Store. Sam has been writing articles for over 10 years and is a commanding voice in the health and fitness community with her articles .