Learning to listen to the Holy Spirit 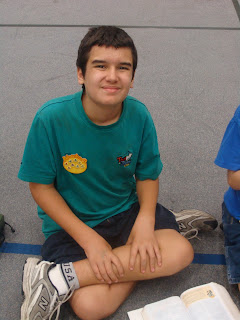 Something happened this week that was nothing short of amazing. For once in my life, I was speechless. For those of you who know me in person, you know that is no small feat.

Remember the trophy for Bible Reading Champion? Well, Logan loves that thing. He dusts it and keeps his room clean so it looks good. He is really proud of it. In middle school youth is where the contest is going on. Every week, the boy who reads the most pages in the Bible gets the trophy. This has been irrelevant to us as Logan wins it every week. He is a reading machine. Yeah, it makes this homeschool mom smile to say that.

To make it fair for the other boys, I agreed that there could be a rule that they only needed to read half the pages Logan did to beat him. All the other boys attend public school (not that public school is bad just time consuming). I understood what Phillip , their youth leader, was trying to do which was to get all the boys reading Scripture like Logan. Getting children to read Scripture is never a bad idea. Never in a million years did I anticipate this happening.

This particular Wednesday, Logan had read the Bible from cover to cover. Yes, the entire Bible in a week. He was confident that he had the trophy in the bag. I had been asked by Phillip to bring the trophy up as another boy had read a lot and might beat Logan. Plus, he wanted the other boys to see it again to motivate them. I was hesitant here. Logan is really competitive and doesn’t always take losing well. Besides, he had read the entire Bible. In a week! Certainly that made him Bible Reading Champion again.

I spoke with Phillip and we agreed that Emma should be called in to help calm Logan should the unthinkable happen. Emma can read Logan so well and she calms him. She is a total God send to Logan. Do you believe in angels on earth? I do after seeing Emma with Logan. I could go on and on about Emma but I’ll save that for later.

Well, the unthinkable did happen. Logan lost the trophy on a technicality. His Bible didn’t have enough pages in it to be more than half of what the other boy read. I was not in the room but was told that Logan was pacing before the count came up and touching the trophy. I was teaching in my Mission Friends room and could not see this ending well.

At the end of class here came Logan walking with Emma (did I mention what an angel she is?) talking and laughing. With no trophy in hand. He came in the room and said he got second place. The boy had read the entire Old Testament. That was more than half. It was 2/3 mom. The boy had won by the rules. Logan seemed chipper about it so I had to be too. To say I was not happy would be the understatement of the year. How can you read the entire Bible in a week and not be Bible Reading Champion? It made no sense to me.

The youth leaders caught me before we left and told me how great it had gone. It was difficult for Logan to do they said but he took the trophy over, smiled at the boy then shook his hand and told him great job. He was genuinely happy that the boy had read the Old Testament. The leaders were overjoyed and could not stop talking about what a great example he had been to the other boys. I was one proud mama. He had done exactly what a Christian should do in that situation.

On the way to take JoJo home, I was spotlighting how proud of him I was of him and how he was turning into a godly young man before my eyes. Then he said this:

Logan: Mom, do you know how I was able to do it?
Me: No Logan, I don’t know how you did it. It must have been tough.
Logan: It was tough but all of a sudden, I heard the Holy Spirit tell me to stay calm. Then a peace I can’t explain came over me. Suddenly, I had to give the trophy to the boy. God told me at that moment that the boy needed that trophy more than I did this week. I couldn’t do anything else Mom without disobeying God. It actually felt good to do it too.
Me: mouth agape and staring at him
Logan: Mom, shouldn’t you look at the road.

Seriously I almost crashed Nana’s pimped out truck. (Sorry Nana). Never in a million years did I expect Logan to say that. Of course, I praised him for obeying and recognizing that it was the Holy Spirit at work in him. I have never been prouder of Logan in my entire life. God is good all the time!