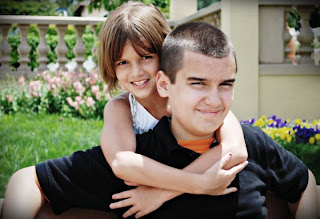 My children generally get along well for the most part. There are times when they get on each other’s last nerve but it happens to the best of us. I try to use those opportunities as ways to teach how to deal with others. Let’s face it. Your sibling is most likely not going to cut you any slack. If you can learn how to deal with them then you can deal with anyone. lol
What I want to foster in my children is a sense of togetherness. I want them to be each other’s biggest cheerleader. To feel like no matter what I do, my brother or sister is there for me. This is not easy for me to teach by any stretch of the imagination. It’s not a relationship that I have with any of my siblings much to my chagrin. It’s not necessarily all their fault either. There is enough blame to go around for everyone. This bothers me to no end.
I want my children to be best friends. To show unconditional love to each other in a way that demonstrates to others around them their love of Jesus. To want to talk to each other and share things together. This is easier said than done on a good day. You really don’t want to know what it looks like on a bad day. Believe me,it’s not pretty.
There are several ways that I try to build this camaraderie between my children. One way that I do that is teach them to encourage each other on a regular basis. I expect them to show an interest in what the other child is doing. A great example of this would be Madison’s dance recital last weekend. She was in the back for most of the recital as she had several dances to participate in. She never once wondered if Logan was watching. She just knew that he was . She knew that he would clap and cheer for her and that calmed her nerves. It was sweet to see. He told her afterwards that she did a fantastic job and it looked hard. lol The only dances that he watched were the ones that Madison was in. He wasn’t interested in the rest.
Another great example that just came up is Madison’s birthday. I expect Logan to buy her something out of his allowance or saved money. This isn’t an option. I also expect him to give it some thought about what she would like and purchase accordingly. It can be something that they do together or that they would both like but it can’t be something that he really wants and she may not. In other words, he can’t buy her a Halo lego set and she can’t buy him a Barbie. I will give hints as to what others are buying her. For the most part, I leave him alone and let him come up with something. Same goes with her .
Often when I see the one of the children struggling with something that the other child can help him/her with then I will remark on it out loud. “Wow, Madison that math looks hard.” or ” Logan looks like he is having a hard time with that search and find”. Sometimes I have to prompt them to go help. More times than not, they are already there.
In our house we encourage this behavior. I will praise them when I see them helping the other child or encouraging each other. Working together also gets high praise. I believe that they will look back fondly at these days as when they formed a lasting bond together. When they became lifetime friends not just brother and sister.
Share
Pin
Tweet
0 Shares