Learning About The Ion Cleanse Footbath For Detox In Autism

My son was diagnosed with autism about 8 years ago at age 3. Ever since then, my wife and I have looked at all options to help him become the best version of himself possible.  In addition to traditional therapies, we look at autism through a holistic lens. One of our newest protocols for autism treatment is using the Ion Cleanse for detox.  Diet is a huge focus for our family, but we also have a major emphasis on detoxification.  The Ion Cleanse is a tool that stimulates detoxification in a safe, gentle way. 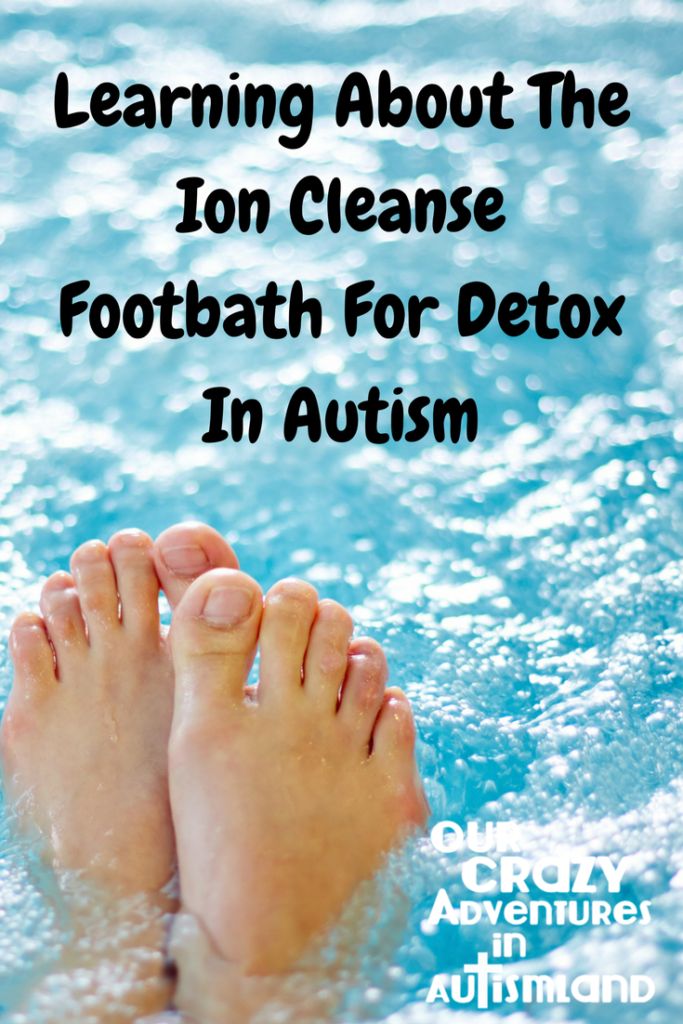 Learning About the Ion Cleanse For Detox In Autism

Before I tell you about the Ion Cleanse, I’d like to first talk about why we need to focus on detox for my son. We work very closely with his doctor in this area. Lab testing has shown us that our son has a pretty big toxic load. His blood & hair revealed fairly high amount of heavy metals like lead & mercury in addition to other such as barium. These toxins clearly affect the body’s ability to function optimally, so we need to get rid of them.

In the past, we’ve tried traditional ways of detoxification through chelation and other detox supplements. These methods turned out to be too harsh for my son’s fragile system to handle. Again, we work closely with his doctor every step of the way, so we’re able to make sure he stays safe.  Luckily, the Ion Cleanse system sort of fell right in our laps.

Wife has been suffering migraine headaches for two days, hopefully getting rid of some toxins will help #detox @ioncleanse #naturalhealth #cleanse #cleanliving

The Ion Cleanse for Detox: What is It?

According to A Major Difference (AMD) the makers of the Ion Cleanse,

“The IonCleanse by AMD is a unique total body detox that uses biocompatible electrical frequencies with the healing power of ions – the same kind of beneficial ions that make you feel so wonderful walking along the beach or near a waterfall. The IonCleanse by AMD is the safest and most effective way to cleanse and purify the body.”

Still Confused on What it Is?

I know this sounds a little “woowoo”. I still can’t get my brain wrapped around that last part either.  The idea that toxins come out of our cells and get pulled through the pores in our feet just seems too out there for even me. However, the company has published test results revealing different toxins in the water after a footbath. Additionally, everyone’s water seems to look different. 3 people can do a footbath using the same water, and the resulting water will look different for all 3. Nevertheless, I still can’t really get my brain wrapped around it, which means I personally have trouble believing toxins come out through our feet.

Using The Ion Cleanse for Detox In Autism

Just because I can understand it, does not mean that it doesn’t actually work. The autism advocacy group, Thinking Mom’s Revolution conducted 2 studies on the Ion Cleanse and autism. They found that in both studies autism severity declined substantially. I discussed these studies in depth .

Ion Cleanse for Detox: Our Results

I believe that the Ion Cleanse is a valuable tool for autism treatment and detoxification support.  However, to be honest, we have not seen major changes just yet. We’ve had minimal improvements in ATEC scores, handwriting, and language. However, we have observed improvements in behavior. He appears to be calmer, more aware, and his anxiety is lower too. While there’s not really a scientific measure for this, our opinion is that he is mentally more stable.

Shortly after we started using the Ion Cleanse for autism, my son began doing an odd thing with his arms. For the first month or so, he would rub the inner part of his elbow repeatedly for a minute or so. This happened at least once an hour. It was so often that the inside of his elbows & forearms had a rash or red mark on it from the rubbing.  Also, he began flicking his arms out. It almost looked like he was trying to pop his elbow if that makes sense.

My guess is the inside of his arm happens to be the place where he has some toxins stored in his body and they are now mobilized which may be causing pain, itching, or some other type of sensation that we just cannot determine because he can’t tell us how it feels. However, that is simply a guess. This behavior actually started more aggressively with biting of his arm, which transitioned to scratching. Luckily, the uncomfortable part seems to be gone, but it is still something we keep an eye on. 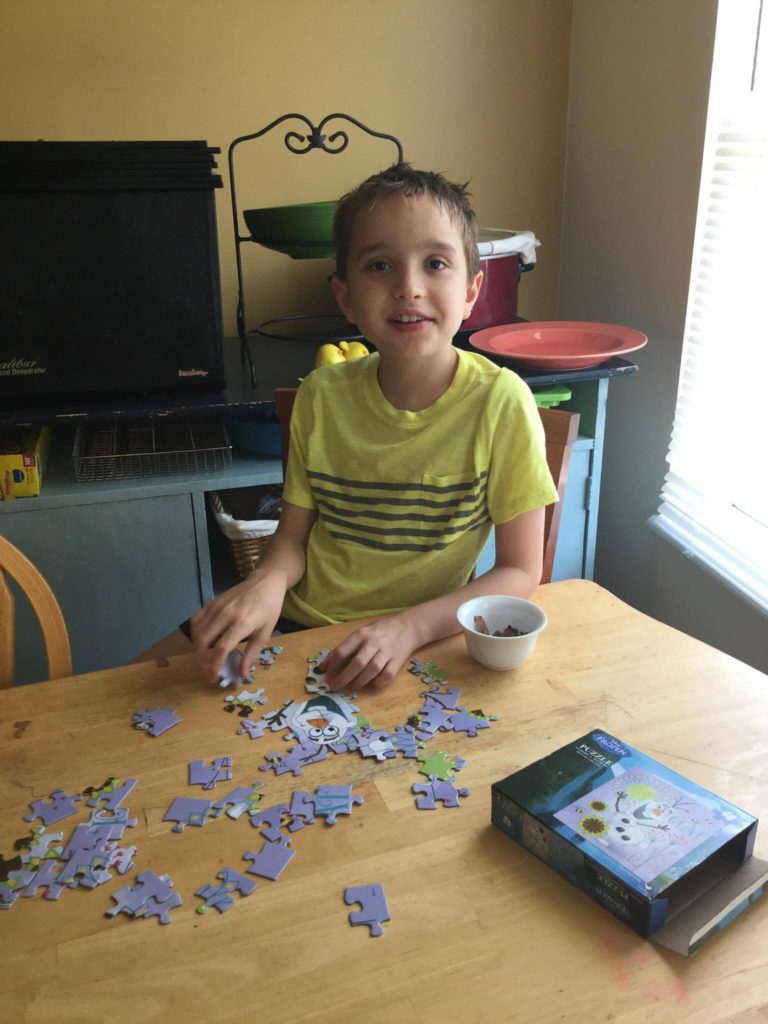 Today, now 6 months later, it doesn’t seem to bother him anymore, but we do notice redness coming and going on his elbows. Specifically, during his footbath, both elbows turn red while his feet are in the water.  I should mention that this is an atypical detox reaction even for the Ion Cleanse. I’ve asked around in an Ion Cleanse Facebook group and no one else has seen this. Most see traditional symptoms & detox reactions, but no on saw it specifically localized on the elbows.

I think one of the reasons we are not seeing big changes is because my son is not moving his bowels regularly enough. If he is not pooping regularly, then the body can reabsorb any toxins that were mobilized by the Ion Cleanse. He needs to be using the bathroom everyday to get that nastiness out! Many kids on the spectrum struggle with GI issues. Our son has struggled for years with constipation. It has gotten markedly better, but it is not good enough to facilitate a healthy detox process. We have to continue to pay extra attention to this mode of elimination.

I dismissed the Ion Cleanse for years. Honestly, had we not won Generation Rescue’s 12 Days of Giveaways contest, I’d probably still be dismissing it as a potential treatment. However, after 6 months of use, I am a believer in the Ion Cleanse.

Despite no major improvements during our first 6 months using the Ion Cleanse for Detox, I remain hopeful. I’m confident that the Ion Cleanse is doing something positive for my son. I believe that is it mobilizing stuck toxins in his body and hopefully it is reactivating the detox pathways that were turned off. I have observed enough to warrant continued use of the Ion Cleanse for the foreseeable future. I believe it is helping. We’ll figure out the best way to support his body and help him detoxify more efficiently moving forward.


Luckily, using the Ion Cleanse for detox has not led to any of the negative reactions or regressions we experienced when trying other detoxification methods.  He remains at what we call, his “baseline”.  With the exception of a hard couple weeks brought on by allergies, he has remained a calmer, less anxious, and overall happier little boy.

Additionally, he has been initiating play more often, which has been awesome. Just a few minutes ago, he asked me to come play with him in our pool. When I say he asked me, I mean in his own special way.

“Water, water,” he said to his Mom.  Then, he looks at me and says, “Dad-Dad-Dad”. I didn’t realize it in the moment, but he was trying to ask me to go swimming with him. I went out about 10 minutes later, and it made him so happy. Grinning from ear to ear, he ran over and started splashing me. I grabbed him tickled him and we wrestled around a bit. Each time I stopped, he’d take my arms and put them back on him and say “play, play, play”. How could I say no when he was doing such a great job asking? We ended up playing for almost an hour in our tiny, little blow up pool.  I look forward to more great moments like these, and I am hopeful that the Ion Cleanse will facilitate even more joy.

Hi. My name is Dave, and I’M SIMPLY A DAD. Everyday, I focus on raising my kids to have a healthy attitude towards food and life. I teach them the power of real food, and the dangers of pretty packaged foods. But, it wasn’t always like this. I struggled with poor health for decades, but my oldest son’s autism diagnosis started me down an alternative path. It was a path that taught me how to better care for him & his siblings. Not only that, it was a path that showed me how to better care for myself and appreciate the important things in life. Now, I want to teach my fellow parents the tricks I have learned to get my kids eating veggies at every meal. On my blog, I share practical, everyday advice and inspiration that you can use to improve the health and happiness of your own family. I’M SIMPLY A DAD on mission to make the road to better health & healing easier for all families.