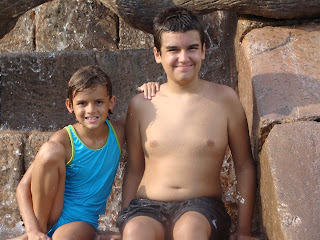 Aren’t my kids super cute?  I think so although one could say that I am a tad biased.  Well, maybe more than a tad.    As I sit here listening to them splash and play together in the pool, I can’t help but think that we are reaping the reward of all the hard work. What hard work you say?  The hard work of building their relationship.  My goal is to make them more than brother and sister.  I want them to be friends .
One way we do this is to encourage them to think of the other sibling .  You’re thinking, ya right.  Stay with me  here.  This is not hard.  For instance, Madison has to sit in the waiting rooms while Logan has therapy.  Having a sibling with autism is hard and tedious.  I started suggesting to Logan that he get Madison a prize when he was done therapy.  If there is something that he thinks Madison would like in the prize box then he could pick it for her.  It’s also simply a suggestion.  He can take it or leave it.  I only had to suggest this a couple of times before he started doing it himself.  Now when he gets a lollipop after physical therapy, he gets here one too.  Not just any lollipop mind you. He really looks in the bag to get her favorite flavor.  It is so stinking cute to see him trying to decide on a flavor.
This had to be encouraged in Madison as well.  She didn’t just start thinking of Logan just because he was thinking of her.  She’s been a little harder than Logan.  He is so black and white in his thinking that I just needed to plant the seed.  Madison has needed constant watering.  It’s a great lesson for her.  Couldn’t we all learn to think of others more often?  For her, I have to constantly remind her to let Logan decide first or  be in charge.  She tends to overcompensate for his weaknesses as do all of us.  I have to rein her in and teach her to let him have a choice.
A great example of this would be the board games.  My children do not get to watch tv except for a certain time of day and for a limited time.  I try to keep board games among other things available for their use.  Madison would pick Uno Spin every time.  Logan really likes Clue and Monopoly.  I will just say out loud to no one in particular.  ” I like to let my friends pick first.”     I have to say this out of ear shot of Logan though or he willl automatically let her pick first.  Sometimes she gives me stank eye and still doesn’t let him pick. But sometimes she does.  It’s those times that I make a big deal about .  The other times I just let it go.  Like Logan and the prize, she can take or leave the suggestion.
Another way that I teach her is to suggest little ways that she can serve him.  Walk the dog for him.  Do one of his chores.  Let him use her netbook before he asks for it.  He can do the same for her. Play in the pool with her.  Feed her cat.  Help her with her math work.  You get the picture.
A great friend thinks of the other friend first. I am not only fostering their friendship with each other.  I am teaching them how to be good friends period.  That is the added benefit of their friendship.  They get to practice their skills with each other and become life long friends.  What is their to lose?
Share
Pin2
Tweet
2 Shares