Have you ever wondered how to help your child with autism acquire language? Do they learn through interaction, observation, or simply by playing with others? What stages are involved? What kind of theories are there? It’s important that you know the different stages of a child’s language development, theories involved, and how an adult affects language learning.

How To Help Your Child With Autism Acquire Language

Similarly to psychology, the “how” part of child language acquisition has been debated by many linguists and psychologists. Noam Chomsky, for example, argued that all children’s brains are prewired to learn, and that we have an “innate” ability to learn language – that it is an inevitable part of development in humans, one of the many things that separates us from animals. Other theorists such as Lev Vygotsky argue the “Nurture” side – children learn from adults, their environment, and through play with each other. It has been my experience with Logan that there is no window of opportunity that magically closes at a certain age. Don’t believe that nonsense.

Before a word can be spoken at any age,  a lot of communication has taken place between a parent and her child. There are five main pre-verbal stages that you may have seen in your child.

The Role of Adults in Children’s Language Development

A child’s first 50 words are usually mostly nouns. Daily routine and child-directed speech enforce and reinforce the same words again and again to a child, making it easier for him to pick it up. Child-directed speech, or “baby talk,” is language used by adults towards a child. Typical features of this include high intonation (raising the pitch of the voice), lots of questions, repetition of the child’s name, expansions and recastings (correcting a child’s errors in grammar and lexis) and simple words that are repeated in daily routine.

The role of the adults is seen as a very important part of a child’s language acquisition to some theorists. Katherine Nelson suggested that correction is healthy for a child – it teaches them the correct use of past or present tense, corrects their sentences and encourages them to speak more. However, over-correction can have a negative impact as it could affect the child’s confidence in speech. There is a delicate balance here. Let your child mispronounce a word on purpose. Maddie would pronounce Canada as Canadia because she had always heard Canadian. It was so cute.

Stages of a Child’s Development

One of the first stages a child would begin to speak at would be the Holophrasis, or the One-Word Stage, where only one or two words are spoken at the same time in one turn of a child’s speech. This follows onto the Two-Word stage, where more words are added to the child’s sentence. Usually at first these are grammatically incorrect, and include many features of Telegraphic Speech, where only the most important words are used in a sentence. Most commonly, the words that are missed out are the words that are considered less important, such as auxiliary verbs (are, is), articles (a, the), prepositions (to, on, for) and conjunctions (but, because).

The next stage is the Fast Mapping Stage, also known as the Word Spurt, where the child picks up a huge amount of words in a short space of time. You may have noticed this in your own child – he asks, he points, he looks, and you name whatever he’s looking at. He will pick up hundreds of nouns every week!

When children begin to string sentences together and answer when they’re spoken to, you may notice a lot of difficulties they have in their grammar and pronunciation. It is said that there are seven pronunciation difficulties in total. These include:

It’s difficult to be able to immediately correct pronunciation difficulties as theorists Berko and Brown discovered that children are usually not aware they are making a mistake. There have been many recordings of adults trying to correct their children when they struggle to pronounce things properly, and the child simply doesn’t understand. Children grow out of this in their own time, of course.

Theorist John Dore (A Pragmatic Description of Early Language Development, 1974) came up with eight functions that are typical of a small child during language acquisition. These include:

Michael Hallyday described “Proto words” as a word that a child may use to describe anything. For example, your child may see a toy and say “Car!”. Then he may see someone he knows and says “Car!” Then he may see some food and says “Car!” Everything interesting is a “Car!”, as it is a familiar sound to your child, and he may be practicing his known lexis, or simply labelling incorrectly.

Theorist Eric Lenneburg described the part of a child’s life where language is most quickly learned as the “critical period”, and if by the end of this the child has not been exposed to language, it is impossible for them to learn language properly throughout the rest of their lives. There are many examples to support this, including Genie and Oxana.

Finally, Berko Gleason investigated the acquisition of plurals in children in his experiment, the “Wugs” Study. He found that children after a certain age know how to create plurals from words they have never heard before.

As you can see, a lot goes into language development for your child with autism. Always assume competence and that your child can understand you even if they can’t express it. 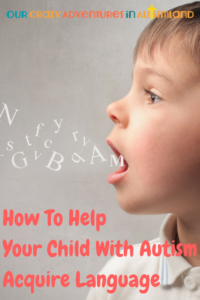